Our memorable experiences with Russian food 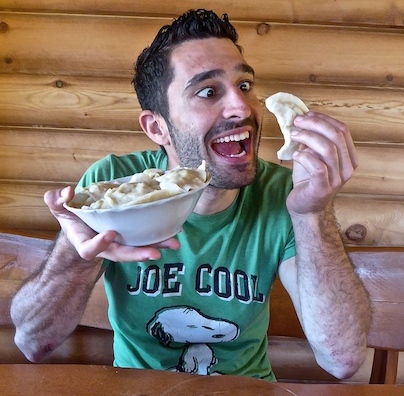 Whilst travelling through Russia, we got stuck into lots of Russian food.

As the world’s largest country, Russian food has a wealth of influence from Europe on one side to Asia on the other – to the delight of these two hungry greedy boys.

This is a summary of some our more memorable experiences with Russian food:

“Vodka vodka vodka and more vodka” comes to mind when you think of Russia.  They love it and they are good at it.  Their supermarkets have an entire aisle devoted to the stuff:

Kvass is a low-alcoholic drink (less than 0.5%) made from fermented bread.  As well as a drink, it is also the base to some of the soups (like Okroshka).  Kvass looks like Guinness but tastes sweet, similar to Pimms:

This was Stefan’s favourite.  It’s a light, beetroot based hot Ukrainian/Russian soup made with a beef or pork broth.  Whilst in Irkutsk, our friend, Genadi Petrov, showed us his very own Borscht home made recipe.

This is a cold beetroot based soup, similar to Borscht.  It is particularly refreshing in the hot Russian summers and therefore very popular with us during our time in Russia in June:

This is a thick spicy and sour soup.  The base is usually smoked meat (or can be fish or mushrooms).  It is also cooked with picked cucumbers, cabbage, salted mushrooms and served with smetana (sour cream) and dill.

The soup is prepared by cooking the cucumbers with brine before adding the other ingredients to the broth.  This soup is also popular in East Germany, as well as Ukraine.

Ukha is a clear fish based soup, sometimes with potatoes and vegetables.  It is usually made with fresh water fish (like Omul, Catfish and Bream) so therefore very popular around Lake Baikal.

Omul fish is generally big business around Lake Baikal.  It is usually caught, smoked and then sold to hungry travellers like these two greedy boys on the train:

This is another cold soup, which is a mix of raw vegetables like cucumbers, with boiled potatoes, eggs and a cooked meat base (usually sausage, or beef) and served in kvass, giving it a sweet flavour.  In Soviet times, Okroshka was made with beer instead of kvass.

We were not a fan of Okroshka as the sweetness from the kvass gave it an odd flavour, which overpowered it.

Dumplings appear everywhere in Asia in different forms.  In Russian food, they are either meat based “pelmeni” or non meat / sweet versions called “vareniki”.

Pelmeni are Russian meat based dumplings which are boiled.

Vareniki are the Ukrainian non meat equivalent (like with potatoes or mushroom).  They can also be sweet based (like cottage cheese).

Whilst visiting Olkhon island on Lake Baikal, we stayed at the popular Nikita’s homestead where we took a cooking class for making vareniki.

And our final input with Russian food:

For more inspiration, read our article – is Russia safe for gay travellers. 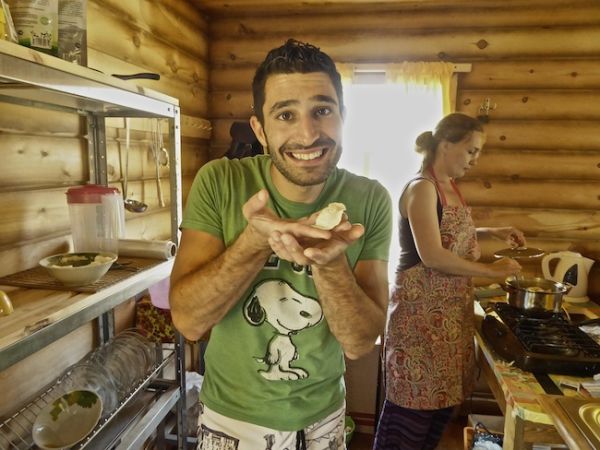